Get to know our performers! Beniwolf will bring us his selection of rap and K-pop musics on Saturday. He and his partners became known on VRChat, and now for the first time they'll leave the virtual world to make a show in real life, in his fursuit. 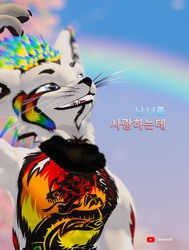 I gave up on my musical dreams almost 15 years ago when I recklessly jumped on the VR meme bandwagon, not thinking at the time that it would change everything. One day we'd the idea to make a parody about Popufurs. That was Rex Gang, which eventually became a professional music production.

The rainbow rex, the VR and the Japanese language are the things what helped me open up myself. Even from a sobbing little boy sitting in the rear seats in school can break through a rainbow rex who sings Tomboy in VR.

I want to show you that you should never give up hope. Nearly 30 musicians from different parts of the world - even an entire symphony orchestra - worked on our K-pop project called One Shot, which took nearly four months to prepare. As a producer and rapper, I'm going to show you part of it live here for the first time.

This year, the Csokonai Cultural Center in the 15th district of Budapest welcomes us. We've gathered some important information you should know before your trip. More >>

We've gathered what programs await you on Friday and Saturday (September 16-17, 2022) at Furdance Budapest's location, Csokonai Cultural Center! A description of continuously running programs can be found in another article. More >>

A few words about the continuous programs that run at the main Furdance Budapest venue. These programs are offered with small interruptions throughout the duration of the event. A description of scheduled programs can be found in another article. More >>

Whether you've a fursuit or not, you've probably seen a fursuit unboxing video. Maybe you even made a similar video when your long-awaited fursuit arrived. We thought, how about we change it up a bit? We're doing an inboxing video, not an unboxing video. What exactly does "inboxing" mean? More >>

Most of you have probably wondered what's happening on the stage during a party, what the DJs are doing when they are performing for you. More >>

Bowling can't be missed this year either! Last year you pointed out that the time booked in advance was too short. Therefore, this year we'll reserve 3 full hours. Here's the most important information! More >>

Karaoke party at Furdance's main venue, the Csokonai Cultural Center! Join us early Friday night at the theater room and choose from the greatest hits of all time! More >>

Long time ago in a galaxy far, far away... If you're a fursuiter and want to discover the light and dark side of the force, register in your profile! The Gameshow is a collection of themed team and individual skill games. This year, the Fursuiters have to compete in two Star Wars-themed acts! More >>

This year's Top 10 was very close, the result was reached in 17 seconds. More >>

Good news everyone! Registration for Furdance Budapest will start soon! Let's see what awaits you this fall! More >>

Like last year, there will be an Artist Alley! If you'd like to have a table to display your prints, plushies, pins or other products, contact the organizers! More >>

This year you'll also have the opportunity to present your own creative drawings and works as decoration at Furdance Budapest. More >>